The World’s first website has returned to the web.  Mostly.  It turns out that CERN could not find an original copy of the site, so downloaded a copy from the W3C archives!

So what we have, is the original URL made active once again, showing a 1992 iteration of a 1991 site, that was the first website ever.

As the first commenter to the announcement blog post puts it: “Great stuff. It’s crazy that 48 copies of the 600 year-old Gutenberg bible exist, yet not one copy of a website made just twenty-odd years ago survives. History will look back at us and roll its eyes.” 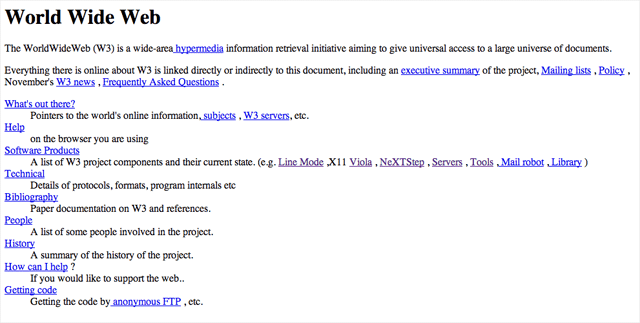 Twenty years ago, on the 30th April 1993 CERN published a document placing the technology that made the web into the public domain.  So what we have is the 20th anniversary of the open web.

The first website was actually made public on the 6th August 1991, and Tim Berners-Lee, physicist at CERN, invented the Web in 1989.

The Free and Open Web

There’s a certain irony, to me, that after twenty years of a free and open web, so much is becoming closed, such as Facebook etc, as the users become the product.  If you were to search “free and open web” today, the majority of first page results are the campaign to keep the web open: http://www.google.co.uk/takeaction/.

Apart from preserving that first site, there are many sites from the early years of the web that have not fared so well.  Even once huge sites are gone completely – for example, netscape.com now silently redirects to AOL.  Aside from the efforts of archive.org, which is far from comprehensive, the web remains a very ephemeral place.

Considering how much has changed in twenty years, I can’t begin to guess what the next twenty may bring…